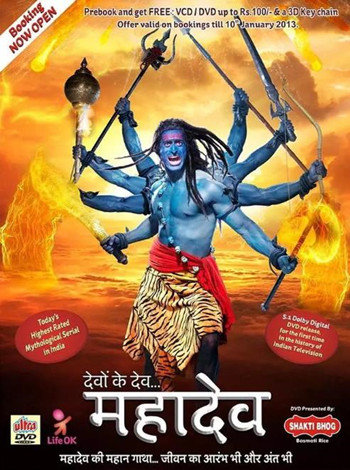 Devon Ke Dev...Mahadev is a Hindu spiritual television drama series which airs on Life OK channel. It premiered on 18 December, 2011 and showcases the story of Lord Shiva, also called as Mahadev.  The drama is inspired by the works of Devdutt Pattanaik. The story has been researched from Bodhisattva and has been penned up by Mihir Bhuta.  Devon Ke Dev...Mahadev is the story of the Hindu God Shiva, also called as Mahadev. The show portrays his journey from a hermit to a house holder. In the show Shiva takes many incarnations and many incidents take place. However, this plot mentions only the major events.  The story starts with the tale of Shiva"s marriage with Sati. Sati who is the daughter of Prajapati Daksha, a staunch Vishnu devotee, is drawn towards Shiva against the wishes of her father. She finally marries Shiva, but soon dies by self-immolation when her husband is insulted at the yajna of Daksha. The grief-striken Shiva produces Virabhadra, who slays Daksha, however he restores Daksha"s life after beseeching of Daksha"s wife. A distraught Shiva leaves with burnt corpse of Sati and wanders the universe. Vishnu severs the body into pieces, shattering them on earth. Shiva transforms the pieces into Shakti Peethas, embodiments of the power of the Goddess Adi Shakti.
《湿婆神/众神之神》高清完整版在线播放由人人影视网倾情提供,看精彩影视记得到人人影视网www.renrenysw.net